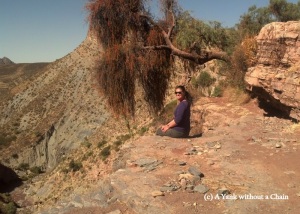 Sitting on a cliff above a waterfall in Maragua, Bolivia

After a month in the off-the-beaten-track Yungas, I was excited to head to the small city of Sucre, which is more developed and tourist friendly. I immediately booked a day hike to the Maragua crater, which in fact is not a meteorite crater but rather formed by erosion. The day trip included a hike down an Incan trail and then another short hike to a waterfall and cave.

I booked my trip with Cretassic Tours, located in the San Francisco plaza, for the sole reason that they had a group already going and all the other agencies I spoke to said I would have to form my own group. Unfortunately, my group was just a German couple who apparently thought they had booked a private tour and managed to delay nearly every part of the day. Not the tour company’s fault, but still annoying. As a result of the delays, I missed out on seeing tapestry designers working in a small town outside Sucre.

Anyway, the scenery on the hikes was magnificent, as is most scenery in Bolivia. I have never before seen so many colors on one mountain! There were parts that looked like mint fudge – deep brown rocks and mud spiked with a magnificent green. You can also see the layers of the earth cut into the sides of the roads. It made me wish I’d taken more geology classes at university!

A special treat on the day I did my tour was that the annual Maragua race was happening. It’s a nearly 100 km race from Sucre to Maragua, and watching those race cars nearly fall off the edge of the mountain cliffs was certainly a thrill! My guide said that no car has ever actually fallen off, which is hard to believe but a relief.

The Maragua “crater” – which is really erosion

A view of the colorful landscape surrounding Maragua, Bolivia

Dust gets unsettled from the Maragua race

The Maragua race makes the Indy 500 look like a cakewalk!