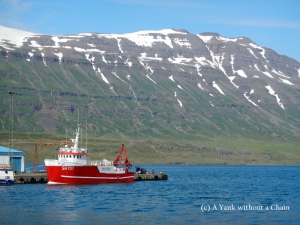 The port and mountain view at Seydisfjordur in eastern Iceland

On my second day I drove along the gorgeous eastern coast of Iceland and visited the small towns of Seyðisfjörður (Seydisfjordur) and Bakkagerði (Bakkagerdi).   I had my first real meal at Seydisfjordur at Hotel Aldan – delicious Atlantic salmon and beet salad – and went on a nearly 6-hour evening/night hike at Bakkagerdi. It was great to get out of the car and stretch my legs for a little while!

The drive to Bakkagerdi was rough going. There is an extensive stretch of windy, winding, gravel road and I was afraid to get my little Nissan Note much above 50 kmph in an 80 kmph zone. This meant other cars passing me on these narrow roads, which made me even more nervous! Needless to say I survived, but this was probably my least favorite drive, second maybe to the drive to Dettifoss the following day.

I also managed to take a shower at the campground in Bakkagerdi. They allow anyone to go in and use the facilities, but you must pay 200 kroner ($1.75) in exact change. I had no change and was asking for someone to break a larger bill, but nobody could. Finally a very kind Icelandic hippie took pity on me and paid for my shower. So now I can officially say that I was in such desperate need of a shower that a stranger was willing to pay for me to take one!

The town of Seydisfjordur viewed from the road from above

The view of the town and the lake

The cute church at Seydisfjordur

A peculiar house at Bakkagerdi

The view from the trail

Some of the wildflowers in Iceland, seen near Brunavik

An inlet of the Atlantic Ocean seen from a nearby hill

I was treated to a beautiful view on my way back to Bakkagerdi!