I’ve been on the road about six months now and it’s definitely starting to wear on me. Planning and research is a complete chore rather than an exciting exercise in possibility. Packing my bag, which used to be a careful strategy, has now become mission to smush everything together in as little time as possible. Every church and monastery is identical to the last. I can’t be bothered to hike up another mountain, learn a few phrases in a new language, or get excited by unfamiliar food. Staying in bed watching movies for two days straight is the most enticing activity my mind can grasp.

This fatigue has led to making a few big mistakes. Mistake number one was not checking my beds in hostels for bed bugs. Of course, as soon as I let my guard down I encountered the little bloodsuckers for the first time. I was in a very lovely hostel in Timisoara on just my second night in Romania. I had a pretty severe allergic reaction and still have the bites nearly a week later. I spent an entire day cleaning and spraying all of my belongings and I almost constantly have psychosomatic itching. I don’t blame the hostel – it can happen anywhere – I blame myself for not being more vigilant.

Bed bug bites on my neck and face (ew).

The second mistake was not doing thorough research before beginning a road trip around Transylvania. I rented a car for nine days from Maya Rent-a-Car for a very fair price, including GPS. I had picked a few cities and towns that I wanted to visit, but figured that since I had a GPS I didn’t have to plan out my routes. Wrong. On my first night with the car I ended up on an extremely rocky, pot-holed road through the Apuseni mountains. One of the potholes busted the oil tank and that was the end of my road trip. It was a mistake that cost me several hundred dollars, the opportunity to see the best of Romania, and a good deal of pride. It was also a mistake that could have been avoided with just the tiniest amount of foresight. 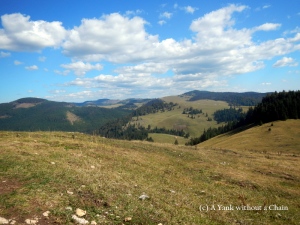 The mountains of Apuseni National Park, just a few kilometers from where my car broke down.

The silver lining of these experiences has been receiving enormous kindness and hospitality from the Romanian people. There were the two men in a truck who were just behind me on the road when my car broke down. They gave me a lift to the nearest hotel. There was the owner of that hotel, who at midnight on a Friday night allowed me to use her phone, fed me, and waited with me the next day for the tow truck to come. There was Eugen, the owner of Maya Rent-a-Car who remained calm and kind throughout the whole ordeal. He spent his entire Saturday coming up to the mountains to retrieve the car and chalked the whole thing up to bad luck. There was Sorin and his family who gave me a lift out of the mountains a couple of days later. When I asked if I could pay him, Sorin looked as if I had asked if he had romantic feelings for his grandmother. There was Adrian, the owner of Undeva Ceva hostel in Deva, who gave me a free night after I couldn’t find a good place to camp. And then there are the countless of good Samaritans who show me the right bus or train, translate for me, carry my backpack, help me set up my tent, let me use their WiFi and so on. If it weren’t for all of these people, I’d still be on the side of a rocky, pot-holed road in the middle of the mountains.

The view of the fortress from the Deva train station. I stayed in Deva a few nights to recharge my batteries.

As anxious, lonely, frustrated, and lost as I’ve felt in the past week, I know that I will be OK. I’ll be OK because the Romanian people will not abide my not being OK. Of course, these experiences are not unique to Romania; there are kind people everywhere in the world. But it’s only now that I truly need the help that I can appreciate it fully. I just hope that one day I’ll be able to pay it forward.

In the meantime, I’m going to do some research on Sibiu and Brasov and get excited about being in Romania!

5 thoughts on “Lessons on Travel Fatigue and Kindness from Romania”