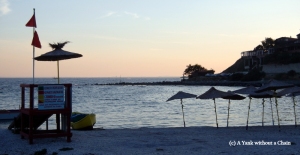 The beachfront at Nessebar on the Black Sea

I spent a very pleasant few days in Nessebar, a 3,000 year old city on the coast of the Black Sea. Tourist season had ended two weeks before I arrived, so I managed to beat the crowds and savor some peaceful moments on the beach. The UNESCO World Heritage Site has Thracian, Greek, Roman, and Ottoman influences and its ancient architecture is very well preserved, so strolling around the town is a great way to spend some time. There are loads of cafes and restaurants as well, with an abundance of fish.

Some boats on a dock in Nessebar

The 5th century Church of St. Sophia in the center of Nessebar’s old town

A statue at the entrance to Nessebar’s old town

A basilica built in the 6th century

A woman knitting some lace doilies, a common site in Nessebar!

One of Nessebar’s many restaurants, Honolulu, with a view of the beach

A view of the beach in Nessebar’s old town

Doors in Bulgaria often have these posters to remember loved ones

Dueling crayfish at Hemingway, a restaurant in Nessebar

One thought on “The Ancient Сity of Nessebar”