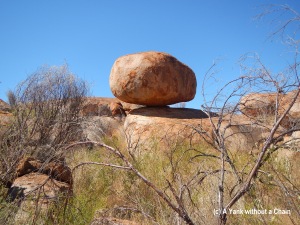 Heading north from Alice Springs on the grand Top End tour, the first big site is Devils Marbles (known to aboriginals as Karlu Karlu). The marbles are so ominously named because there is a toxic plant that grows nearby, and when the European farmers came through their sheep all dropped dead. The site, like most in the area, are sacred to the local people and conservation is paramount. However, unlike Uluru and Kata Tjuta, visitor access is largely unrestricted and no tickets are required.

The boulders are quite strange, as a lot of them are completely hollow and can be split very easily. Still others are precariously balanced on larger rocks. One guy in my tour group remarked that they looked like they’d been dropped down by a particularly heinous tornado or hurricane, but actually they were carved out through wind and water erosion from a layer of granite under the earth’s surface over hundreds of millions of years.

Sitting inside a cracked marble

Another split piece of granite 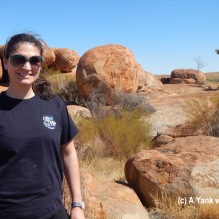 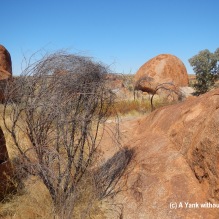 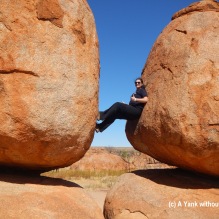 Hanging out between two of the marbles