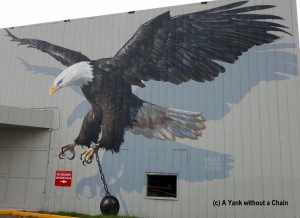 A mural at Kingspoint, a street art mecca in Houston.

Of course in Houston I hunted out some street art. I took a side trip to Kingspoint on my way down to Galveston, but unfortunately there wasn’t much going on there and most of it was blocked off. What I did see were enormous, beautiful murals and lots of tags. It would have been great to go when artists were there working.

There was also quite a bit of cool stuff around the Montrose neighborhood. I honestly can’t remember where I took a lot of these pictures, but I believe most were either Kingspoint or Montrose.

END_OF_DOCUMENT_TOKEN_TO_BE_REPLACED 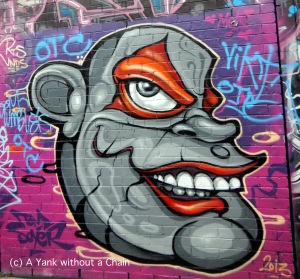 A mural in St. Kilda

During my rainy afternoon walking around St. Kilda I found a ton of gorgeous street art all throughout the neighborhood. There were entire alleyways completely covered in gorgeous rainforest motifs or elaborate tags. The variety of motifs and styles was striking.

END_OF_DOCUMENT_TOKEN_TO_BE_REPLACED 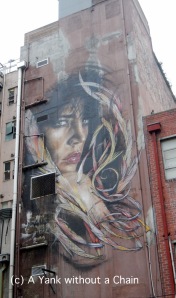 This batch of photos comes mostly from Stevenson Lane in the CBD and the neighborhoods of Collingwood and Fitzroy. Some of the most impressive murals (only one of which I was able to get a good photo of) are the gigantic women’s faces done by the extremely talented Adnate. His works are mostly commissioned and they tower above the city streets.

There are some whimsical characters to be found on doorways and next to windows, as well as some environmentally-minded works like the “I’m Getting a Brazilian” sticker.  I quite like the “Now” stencil – a reminder to focus on the present moment – which can be found in various places throughout the city. The images of the iconic Ned Kelly found on Stevenson Lane (off of Tattersall’s Lane) are also great.

This is only a tiny sampling of what can be found on Melbourne’s Streets. A lot of the most impressive works are too big to get proper photos of and simply must be seen in person.

If you like these, check out my first Melbourne street art post. Stay tuned, because there are more to come! END_OF_DOCUMENT_TOKEN_TO_BE_REPLACED

A fish mural in Fitzroy, Melbourne

Street art in Melbourne is – in a word – amazing. The laneways in the CBD and neighborhoods like Fitzroy and Collingwood are havens for artists, many of whom create larger than life murals. Hosier Lane near Federation Square is the most famous and it is constantly changing. I have visited three times over the past three weeks and each time I’ve seen brand new, very impressive pieces. Croft Alley, Centre Place, and Tattersall’s Lane are also good places to check out in the CBD.

Most of these photos were taken in the aforementioned places, and this is the first post of a series of three (at least for now!).

One thing I’ve loved about documenting street art is seeing some familiar tags and murals that are obviously done by artists I’d seen before. In Melbourne’s case, I see some of the same characters that I saw up in Chiang Mai. It’s like an international treasure hunt!

END_OF_DOCUMENT_TOKEN_TO_BE_REPLACED 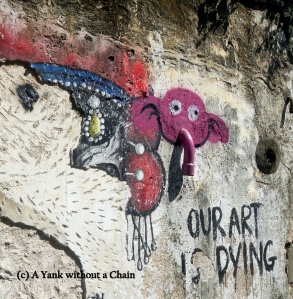 A pink elephant and a cynical message on a wall near Lebuh Armenian in George Town, Penang

I had just 9 days in Malaysia and I was feeling a bit worn out on the bus rides, booking new hostels, getting orientated to a new place and so on, so I decided to just spend the whole time in the UNESCO heritage site of George Town. It’s a very tourist-friendly small city that’s pretty cheap, and almost everybody speaks English. It’s also famous for two of my very favorite things: food and street art. I was quite a happy camper!

The street art in George Town is dominated mostly by a series of murals that are advertised in a popular tourist map (Marking George Town). Most of these had at least a handful of other tourists snapping pics when I found them. The common theme is protection of animals – particularly cats – and promoting responsible pet ownership. There were a few other nice pieces that I found scattered about as well.

In addition to the murals, there are wrought-iron caricatures with messages about George Town’s history all throughout the city. They’re a fun reminder of the history behind all the streets.