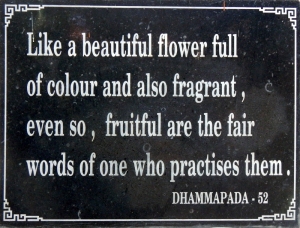 After Hong Kong I felt another bout of travel fatigue setting in. I flew to Manila and stayed for just a four-day layover, which was meant to be relaxing but instead just added to my anxieties, as Manila is a rather dirty, hectic, and poverty-stricken city. From Manila I flew to Ho Chi Minh City, which was again extremely hectic and stress-inducing. I was not in the mood to sightsee or take a lot of photos, although I did visit the War Remnants Museum which was a sobering way to spend an afternoon.

When I finally got to the beach town of Nha Trang, it was great to relax and eat some delicious, cheap fish dishes. I finally got back into a travel mood and started sightseeing again. One of the few main sights in Nha Trang is the Long Son Pagoda, a Buddha statue and temple situated about a 20-minute walk from the main part of town. I got lucky and ended up being the only tourist there, although when I was leaving a massive group of talkative Russians was coming through the gate. Also detracting from the peaceful atmosphere were rather aggressive “students” selling overpriced postcards. Despite this, the site was worth seeing and spending a few minutes walking around.

The bell of the Long Son Pagoda

The bell of the Long Son Pagoda

Memorials at the Long Son Pagoda

A Buddhist mosaic outside the Long Son Pagoda temple

4 thoughts on “Getting to Vietnam and the Long Son Pagoda”